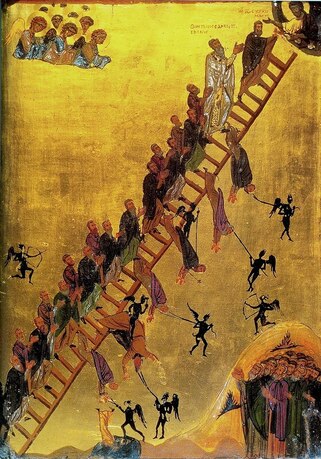 "Let us try to learn Divine truth more by toil and sweat than by mere word, for at the time of our departure it is not words but deeds that will have to be shown." ~St. John Climacus

THE VENERABLE JOHN CLIMACUS OF SINAI 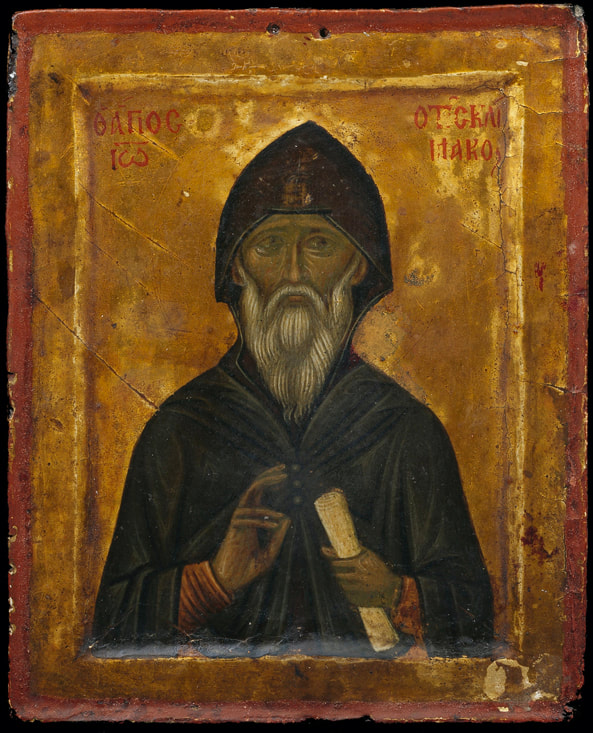 Note: The translation below comes from an edition published by St. George Monastery in Jerusalem. Studion Ministries is presently working on a new edition officially blessed by Archbishop Damianos of Sinai. The copyright and all profits of the new edition, when released, will belong to St. Catherine's Monastery in Sinai.
I
Excerpted from the Ladder of Divine Ascent, by St. John Climacus:
1. I doubt whether anyone at all can tell what city brought fourth that great John; for who has left us a record of that city and those parents and the former life of this wondrous man? The city where he now dwells is the heavenly Jerusalem, of which he had always been a worthy citizen. For this man of God was only 16 when he consecrated himself to God and ascended Mount Sinai, for his clear-headed reason had chosen the life of solitude and contemplation. This blessed man spent 19 years in submission and utter self-control, training himself to the utmost in the study of the Divine Scriptures. He ate whatever is permitted for those who have set themselves apart for the godly walk and way of life, and in this way I think he brilliantly crushed the power of pride. 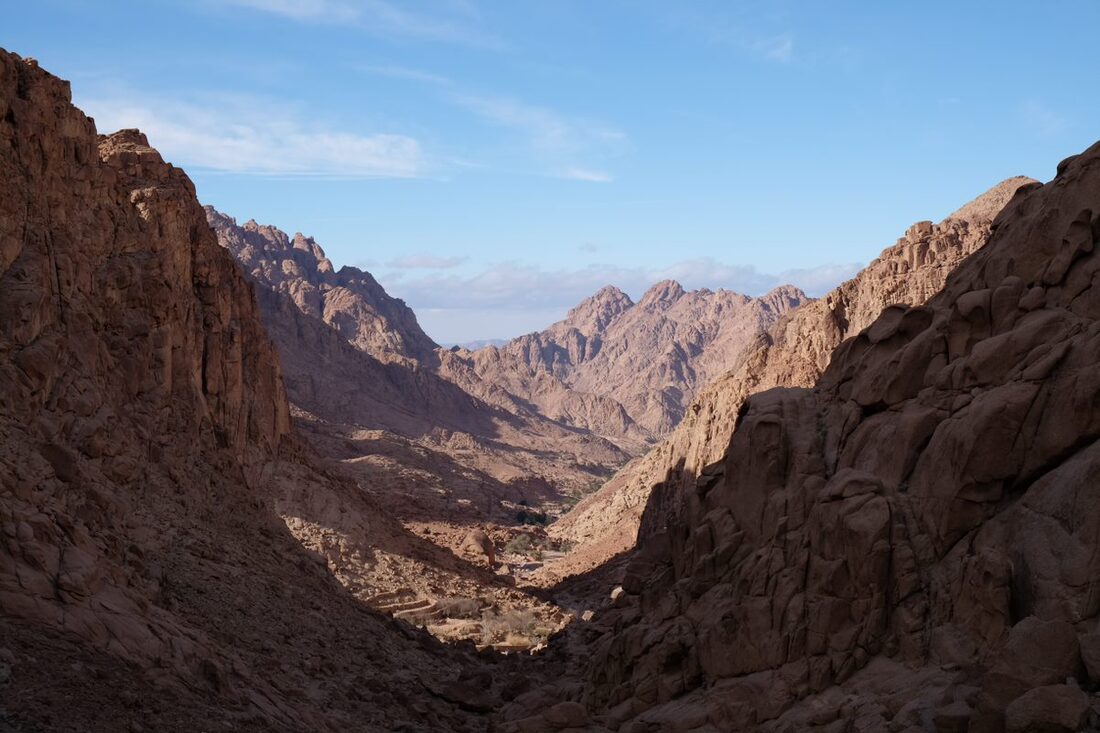 The wadi where the Cave of St. John Climacus is located.
2. After so many years, this noble man moved out and built his dwelling five miles from the chapel, surrendering himself to utter solitude and stillness. There in a place called Tholas he lived and practiced virtue for 40 years, always aflame with the fire of divine love and devoting his life to the study of death. There with him, wrath and anger found no place, for they were put to death by the sword of obedience; by holding his body, and even more so his speech, in check, he utterly crushed vain-glory. Who could tell of his well of tears, or even comprehend it? For there was never a moment when this godly man’s eyes were dry of tears, something which few have even striven for, much less attained. The blessed man slept just enough to keep the stuff of his mind from being being ruined by vigils. His whole life was an ever-flowing river of prayer and unparalleled love for God. At all times he saw it in the mirror of his holiness and purity; the man would not, or more truly, could not get his fill of this love. 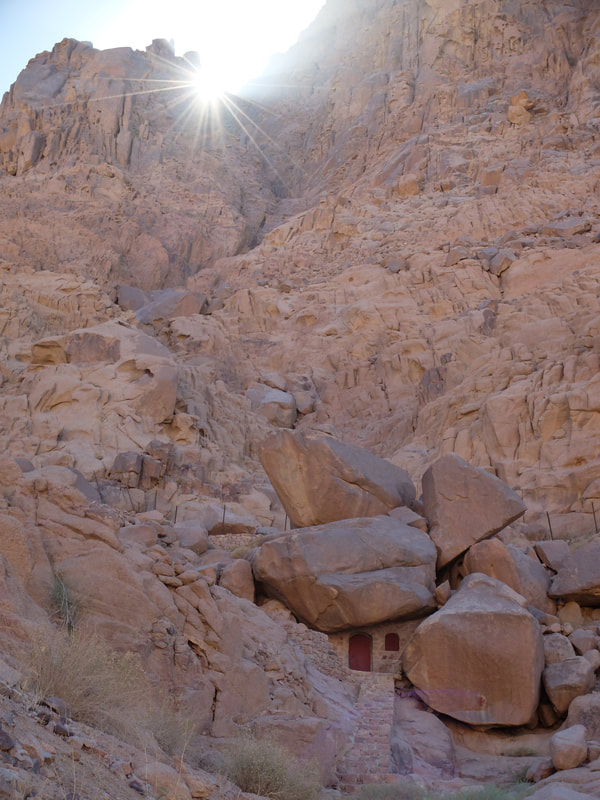 The cave of St. John Climacus
3. And so this man, disciplined in every virtue and filled with the deepest contemplations, was known as the greatest teacher of all the ascetics of Mount Sinai, as his letters plainly show; for they are replete with all manner of human and divine wisdom. In short, there is nothing at all that serves the interest of the soul or godly ministry that does not find mention in his works. Anyone who reads them will see that what I say is true; for his book the Ladder truly does lead the race of man from this earth heavenward. Many of those who live on the Mountain look to his blameless conduct and pattern their lives after his divine example. The greatest of all these was the venerable Moses, one of the monks who had chosen to live on the Mountain; he besought this great man to become his disciple, both for his own sake and many others’, that with him as a teacher he might grow in the pursuit of true wisdom. The blessed man accepted him, and he immediately entered his service. 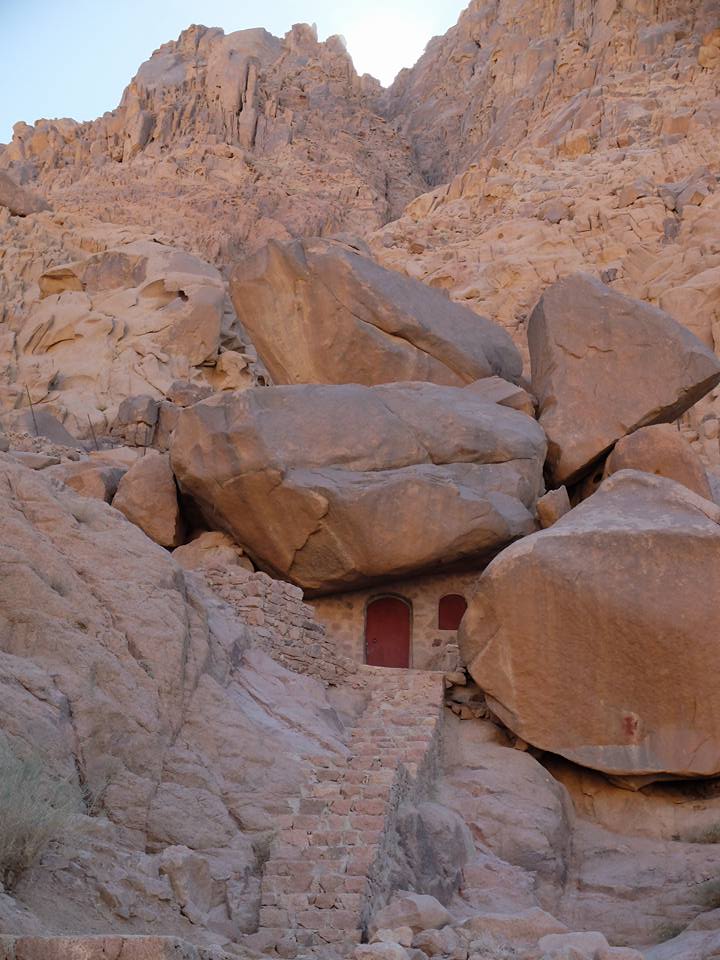 4. One day, the master charged him to bring earth from some other place for the vegetable garden from which they were accustomed to eat; he leapt to obey the command. Now the midday sun was blazing, and Moses was exhausted from the effort and from the heat, and desired to take a quick rest; so he lay down under a massive boulder and fell asleep. But he was in grave danger, for the boulder threatened to roll over on him. Now at the same time, that wondrous John was praying to God away in his cell and had dozed off into a light sleep. He heard what seemed like the voice of someone waking him, “While you sleep soundly, Abba John, Moses is in terrible danger.” So the saint leapt awake and made intercession for his disciple, and when he returned he asked him if something importune or unexpected had befallen him. Moses replied, “A massive boulder almost crushed me as I slept under it at midday. But when you called, Father, I awoke and escaped the danger.” That humble man told his student nothing of what he had seen or done on his behalf, but silently offered up to God the thanskgiving that was due. And in this way, thanks to the father’s prayer, Moses avoided the looming catastrophe. 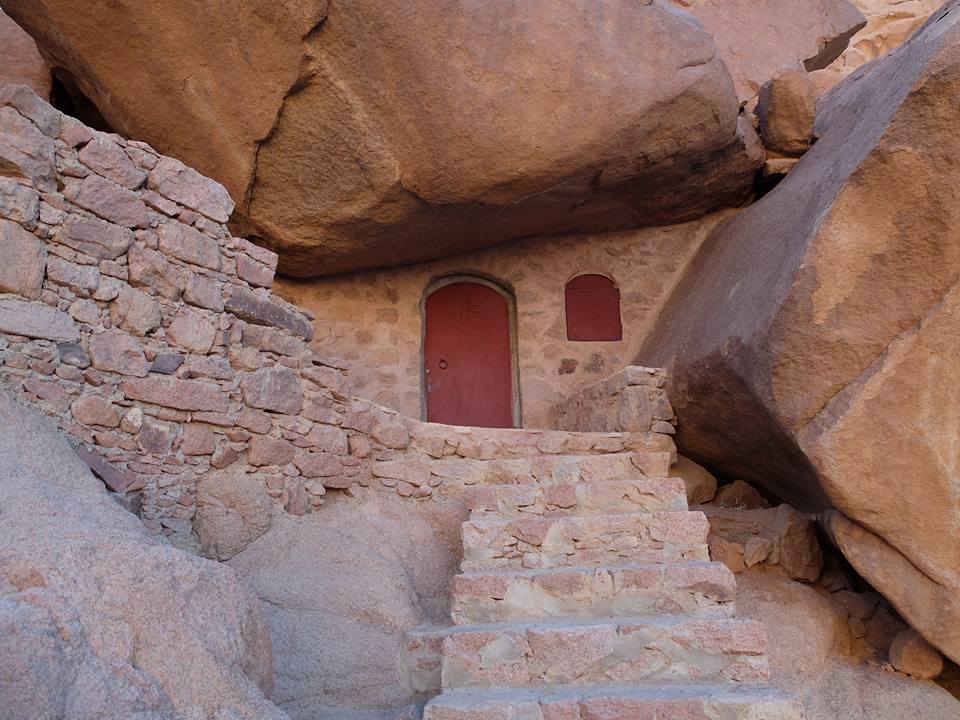 5. John also proved himself a brilliant and able doctor of the unseen wounds of the soul, as we will see here: A monk named Isaacius was hard-pressed by a warlike and fleshly demon and came running to the elder; with tears he recounted to him his struggle with the flesh.  The father was impressed by his faith and said, “My friend, let us stand together and pray.” As soon as they had finished the petition and while the wretched man was still lying on the ground, God granted the wish of his servant: the evil thought at once took flight, and with it that crooked serpent that had gone up into the man. He was overjoyed to be free of his plague, and gave thanks both to God who had honored His servant and the servant whom He had glorified. 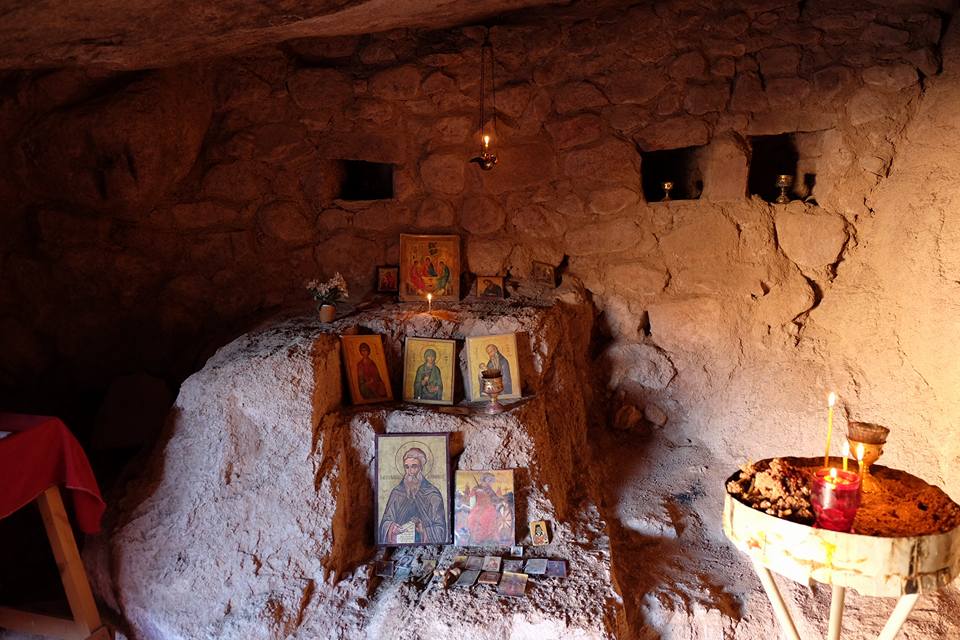 The interior of the cave of St. John Climacus.
6. Now at one point some of the brothers were pricked by the sting of jealousy and slander, calling the holy man a babbler; but he, not wishing to give offense to anyone, became all things to all men, just like God’s Apostle and spent an entire year in silence, damming up the sweet rivers of his tongue and their torrents, so that in the end those who had mocked him now begged him to speak, for they believed and confessed that a great wellspring of good had been cut off. Then, not persisting out of stubbornness nor defending himself against his false accusers, as someone more base and with less spiritual grace would have done, his tongue reassumed its previous state, giving forth once more an ocean of God-taught speech. 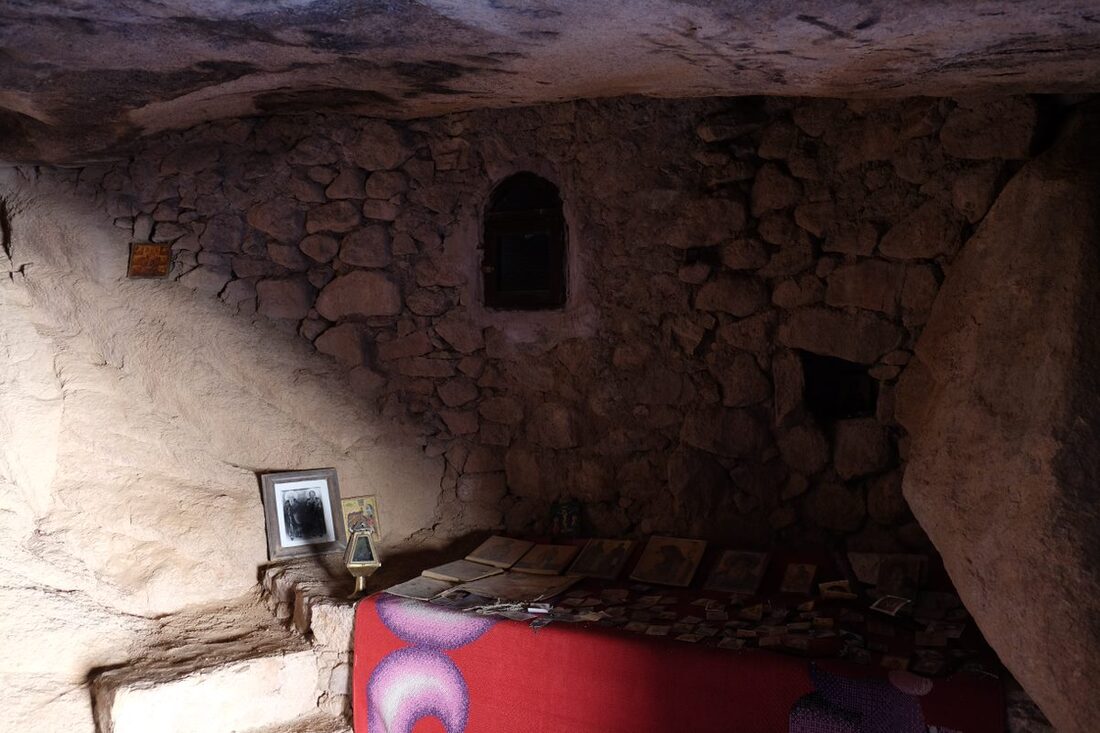 7. Thus this great man led the brothers and shone forth brighter than the sun in every virtue; he died old and full of years and appeared like a second Moses, in the same way piercing the untrodden darkness and ascending the steps of thought to the divine law and contemplation. He opened his mouth with the Word of God and drew the Holy Spirit to himself, and led the brothers like Israelites through the sea of life on dry ground. And in one way (though this may seem a bold thought) I would say this blessed John even surpassed Moses the God-seer, for he secured passageway into the heavenly Jerusalem. For Moses failed to attain the earthly Jerusalem for which he had suffered so much hardship by land and sea, although he was deemed likewise worthy of the heavenly Jerusalem. 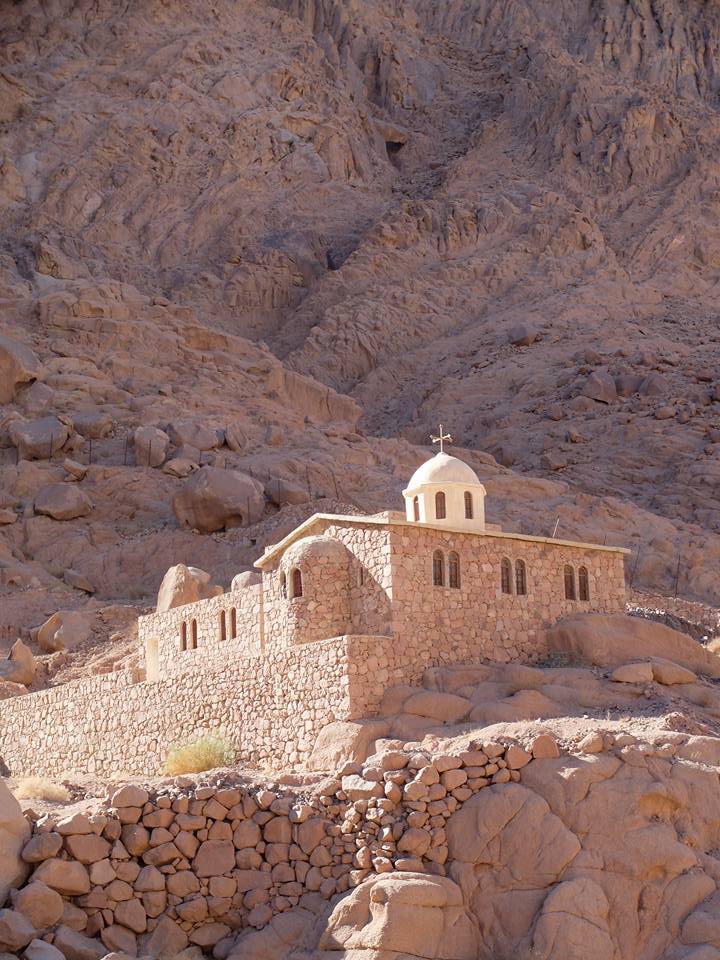 A chapel built near the cave in honor of St. John Climacus.
II ​
Now one day there came to us some 600 visitors, and when they sat down to eat, our holy father John observed someone dressed in a Jewish garment with short hair running around and issuing orders to the cooks and housekeepers and storeroom masters and all the other servants. When the people had gone and the servants sat down to eat, they sought for the man who had been going around and giving commands, but they could not find him. Then the servant of God, our holy father, said, “Leave him be; it is no wonder Master Moses was managing the affairs of his own house!” 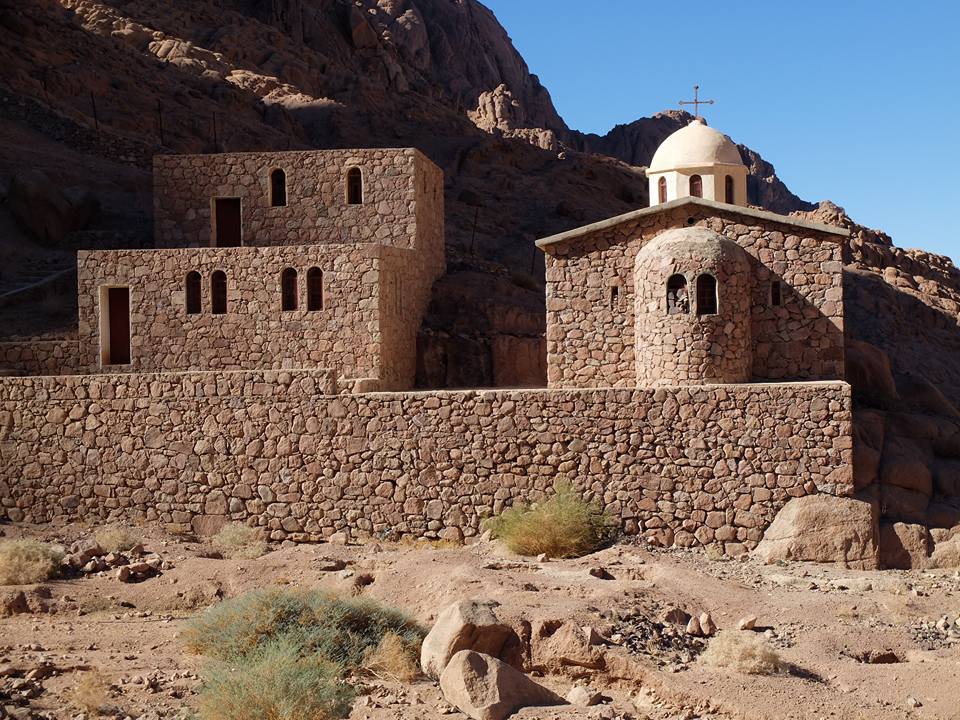 III
John, most holy Abbot of the Holy Mount Sinai, told us this story: “A few years ago, a certain man became caretaker of the church on the Holy Summit. One evening when he went up to burn incense, a snowstorm blew up out of nowhere, so heavy that it buried the whole surface of the Holy Summit under three or four cubits of snow and stranded him up there with no way to get down. (Back then, no one would ever dare to sleep up on the Holy Summit.) The caretaker finally dozed off around dawn as he was reading the liturgy and was transported by God to St. Peter’s Basilica in Rome. The priests were shocked to see him suddenly appear in their midst, so they went up to the Pope and told him what had happened. Now by God’s providence, they found he had the keys to the gates tucked into his belt and read: “To the Holy Summit of Sinai”. So the most holy Pope took him and tonsured him as bishop over one of Rome’s cities. He then asked him, “What does the monastery need?” And when he learned that the monastery had need of an infirmary, he sent money and instructions to build one, indicating both the story with the caretaker and the month and the day; and I was a healer in this infirmary.” 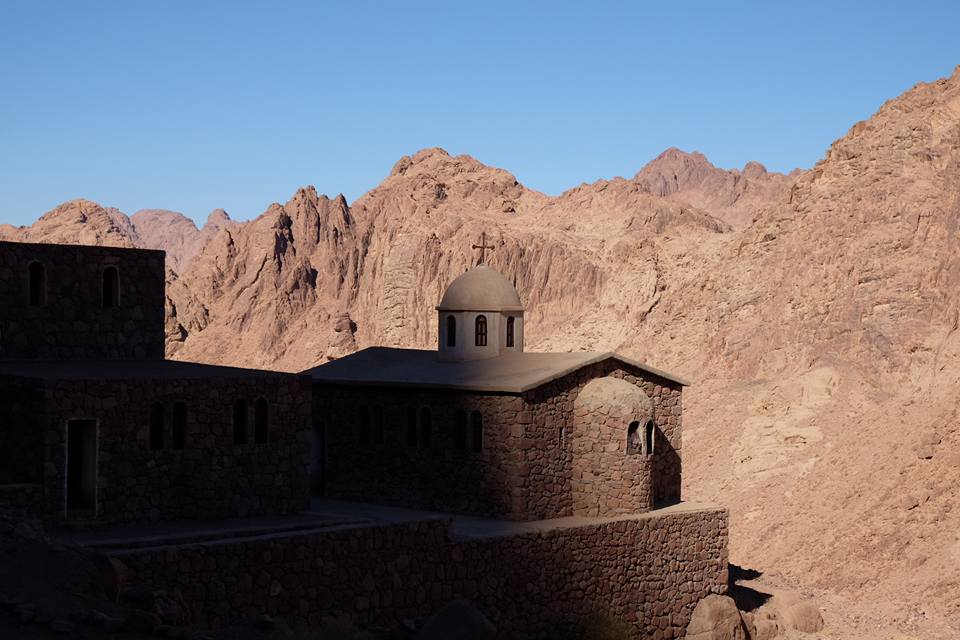 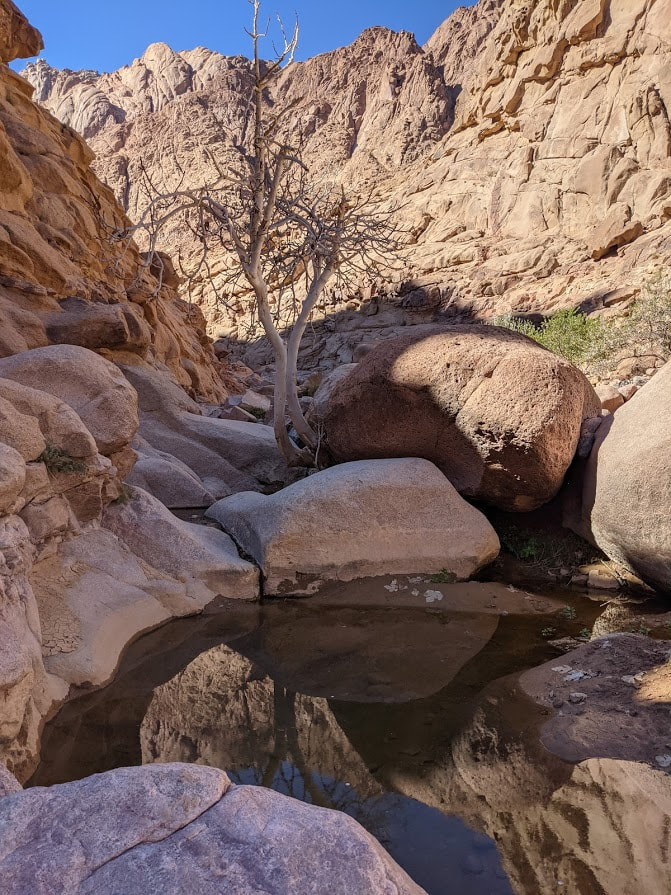 A creek near the cave of St. John Climacus. 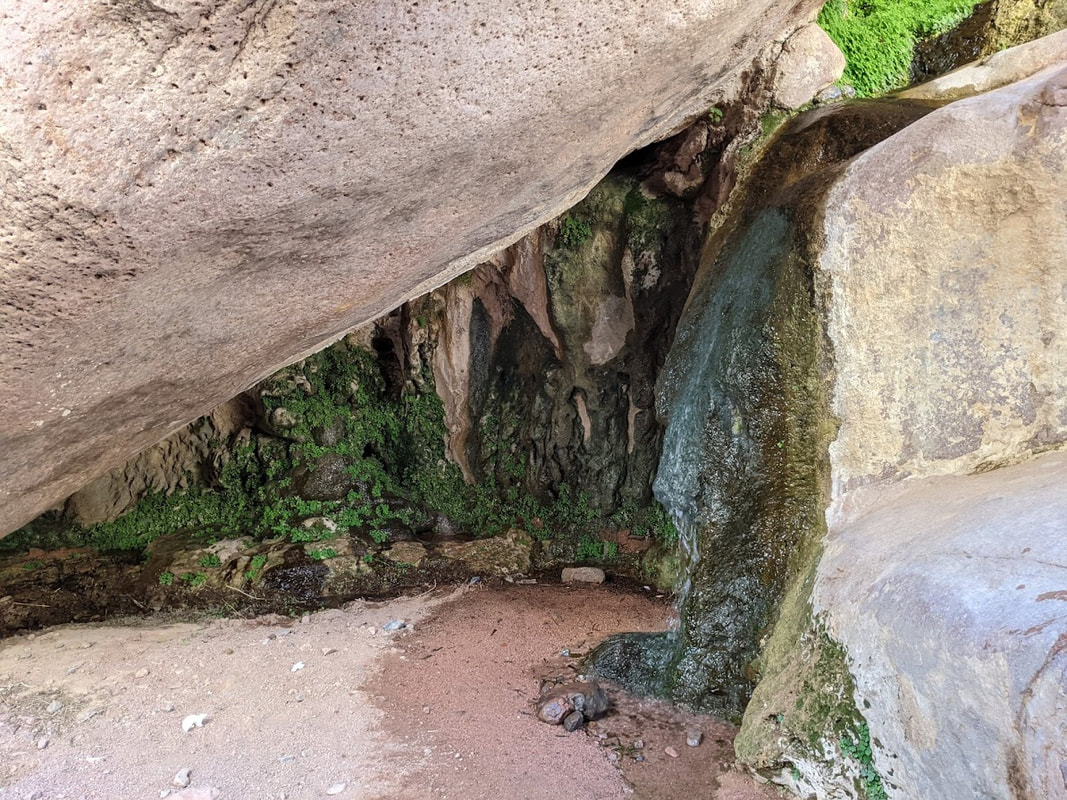 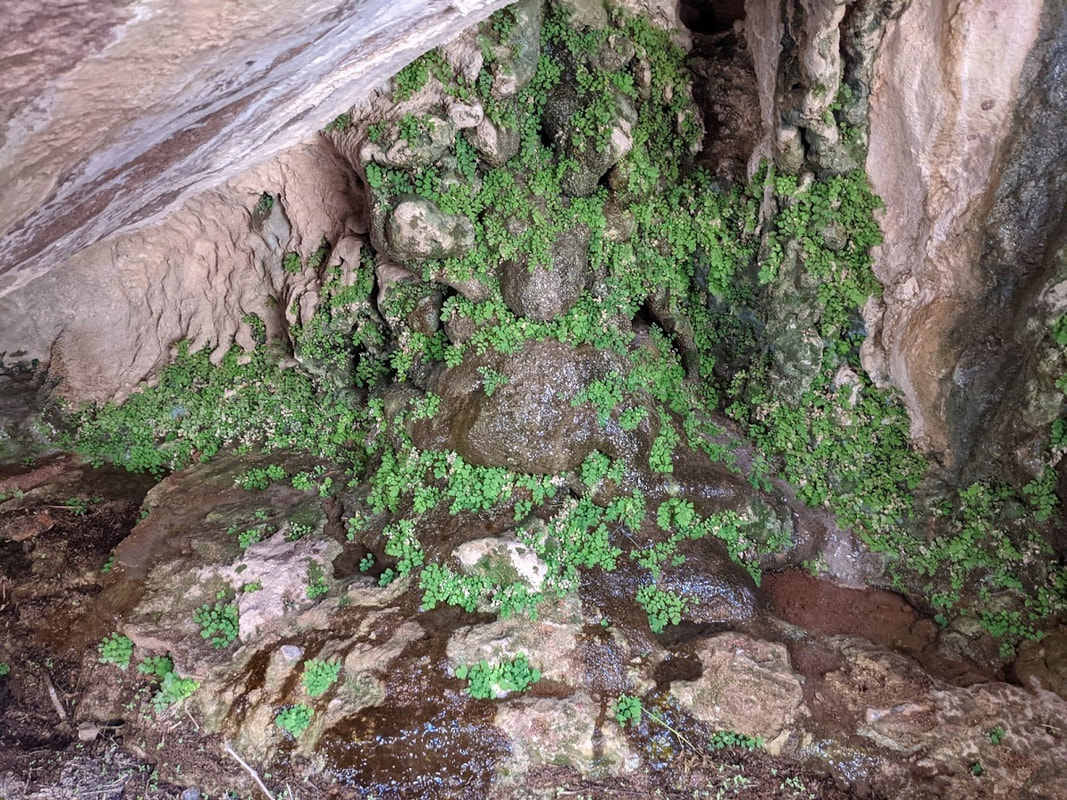 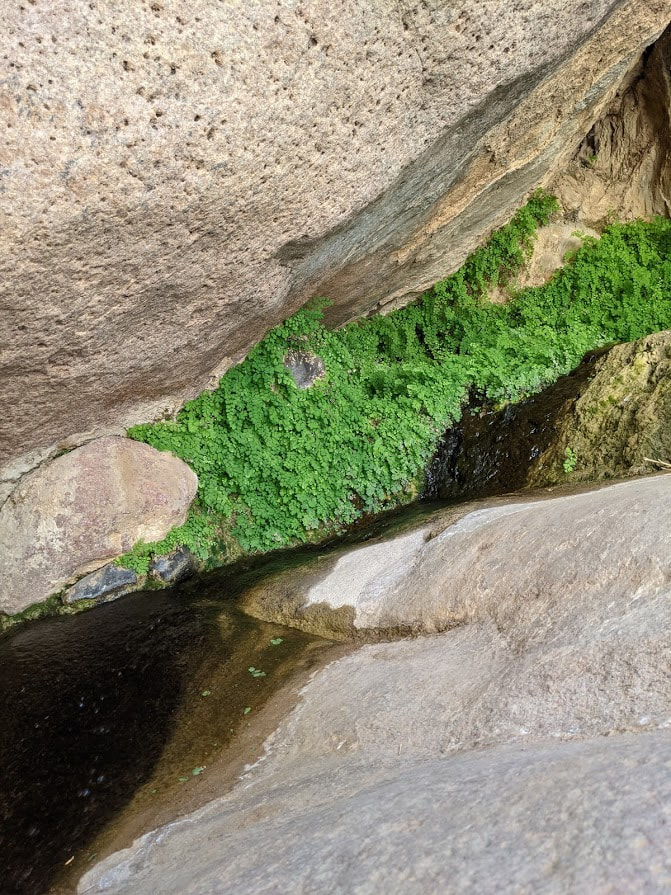 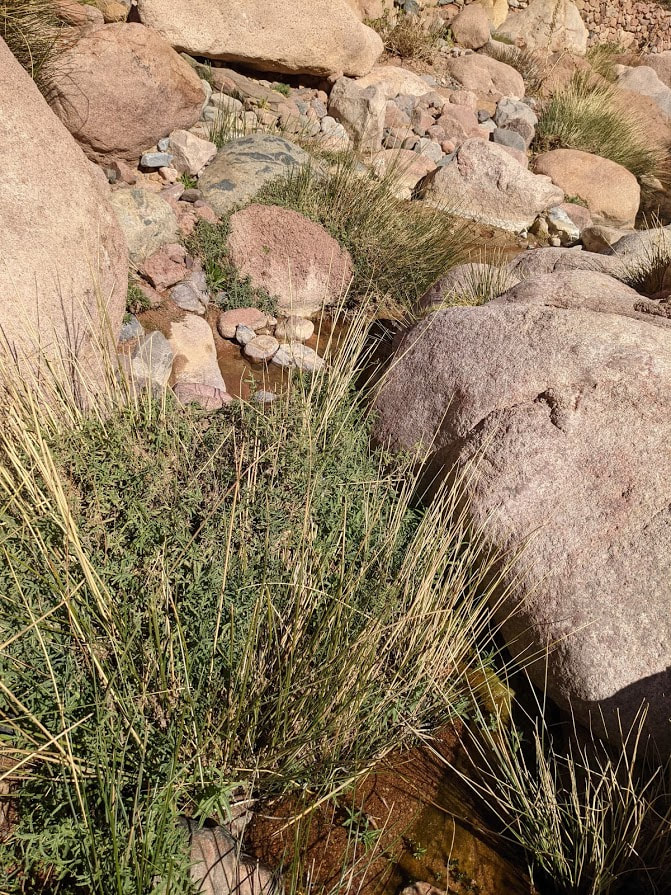 Wild Sinai mint growing in the creek near the cave of St. John Climacus.